“It’s a fine thing to be arrested upon the charge of having broken into the Bank.”

“It’s a fine thing to be arrested on suspicion of murder, I’ll not forget it.”

Charles Warburton upon his arrest [50]

Charles Warburton was born in England c.1855. He left from Gravesend on the 20th September 1877 on board the barque “Robert Morrison” arriving in Perth Western Australia on the 22nd December 1877. A newspaper article publishing the passenger list of the Robert Morrison shows that Charles was aged 22. [79]

At the time of writing very little is known of his life in Western Australia prior to the murders of William Anketell and Henry Burrup in 1885. It could be inferred from a statement made by Charles Zeddie (see below), that Charles may have proceeded to Roebourne shortly after his arrival in Western Australia.

There is just one brief mention of Charles in an advertisement listing the departing passengers for the Port of Cossack on board the schooner “Planet” on the 29th December 1883. [80]

During the murder trial, some witnesses gave personal testimonies of Charles during the course of giving evidence and it is from these that we gain some small idea of the character of the man.

Charles Zeddie said that “I have known Warburton for the last seven or eight years; he has always borne the character of being a very honest, quietly upright, inoffensive man” [50]

William Noonan, publican of the Victorian Inn / Hotel where Warburton resided had this to say, “I have always known Warburton as a sober, honest and well behaved man. [50]

Richard Eaton the butcher, who employed San Qui, one of the murder accused, said “So far as I know Warburton is a very honest, quiet, inoffensive man.” [50]

Roderick McRae, in reply to a question asked by the judge, gave a slightly more mixed testimony with regards to Charles Warburton. He said he had known Warburton for some time, he was a peaceably disposed man generally speaking, but upon one occasion he and Warburton had come to blows in the previous August and it was over a pup Warburton had belonging to him; they had a tussle in which he made Warburton’s nose bleed. [50]

Prior to the trial, Charles Warburton and San Qui were in the same prison cell in Roebourne and had the following conversation.

San Qui: “No one walk about tonight.”
Warburton: “That’s a good job, we can go to sleep.”
San Qui: “Me no can sleep.”
Warburton: “You ought to talk um to your god, he make you alright.”
San Qui: “Bevan no talkee to me like you, Charloi.”

San Qui obviously appreciated these few words from his cell mate, and his reply indicates something about the way he is spoken to by Warburton as opposed to his supposed close friend Frederick Bevan. Perhaps Charles was following his own advice too and taking solace in prayer.

An observation was made by a reporter from The West Australian Newspaper at the end of the murder trial. In part it reads “An incident occurred which many may think a fair revelation of the white prisoners’ characters. One of them warmly, and with the utmost feeling, thanked the counsel for the defence for the efforts which had saved him from the hangman’s rope.” Knowing a little of the characters of both Charles Warburton and Frederick Bevan I believe this statement refers to Warburton.

After Warburton was found not guilty for the murder of Thomas Anketell, and according to a memorandum on the police file, it was his intention to return to the North West. However, this did not eventuate. This may have been because he had met his future wife. For in the following year, in 1886 he married 17 year old Rose Sweetman, daughter of Henry and Elizabeth (nee Adams). [66]

In 1887 he was a labourer at Serpentine when he applied for an immigrant grant of 50 acres in the Cockburn district. [87]

By following the post office directories dating from 1893, it can be seen that in that year Charles and Rose were living at William Street S. Chesterfield in the Fremantle area. Around 1896/97 it appears that Chesterfield became the suburb of Beaconsfield. In the 1897 directory their address in William Street Beaconsfield has location instructions ie. Douro Road to Lloyd Street right hand side.They were at this address until 1900 and then moved to the town of Greenbushes in the Blackwood area with Charles now being shown as being a “miner”. Charles and Rose were to live in this area for the rest of their lives. [81] 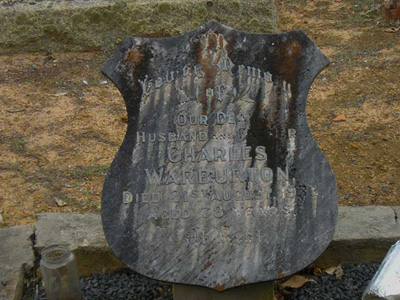 The headstone of Charles Warburton
in the Greenbushes Cemetery W.A.
Photo taken by Marylin and Steve Jones
and courtesy of Lorraine Larment, Oz Burials