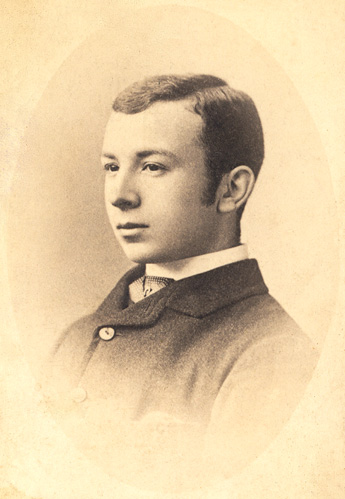 Henry Thomas Wood Burrup
Photo apparently taken two weeks before his death.
It appears this photo is a copy taken from the original .
Reproduced with the permission of
Australia and New Zealand Banking Group Limited.
ANZ Group Archive reference UH1-49

Henry Thomas Wood Burrup was born on the 22nd November 1861 in Longford, Gloucester England and was the youngest son of John W. and Margaret Burrup. [41] According to the 1881 British Census, he was a bankers clerk and lived at 4 Palace Yd, St Mary Lode, Gloucester with his widowed father, a solicitor and maiden aunt, Elizabeth Burrup.

For 5 years he worked for the National Provincial Bank of England & Gloucester. But after those five years perhaps life was becoming too predictable for young Henry. Maybe he was seeking new horizons or adventure because in 1883 he packed his bags and left for Australia. He arrived in Australia in 1883, on board the “Orient” to serve three years with the Union Bank. His service commenced on the 20th April 1883 as a Clerk at the Perth Office. He was then transfered to the Fremantle office where he served from 6th November 1883 – 6th June 1884. On the 20th June 1884 he was appointed as Accountant for the Roebourne Branch. [58]

By all accounts, it would appear that where ever he went, Henry settled in well making many friends. His death would have bought them much grief.

In a letter from the bank’s administration, Frederick Innes, Assistant Inspector to the London Manager, W.R. Mewburn wrote,  “Mr Burrup, though comparatively a junior, was always highly spoken of by Mr Denny [the bank’s Perth Manager] and was a gentleman who made friends everywhere.” [59]

Newspaper reports also indicate his popularity. The West Australian Newspaper reported that “Poor young Burrup …….. who was employed for some time at the head office, made many friends while at the capital, and was a very general favourite. [1]

And, in a later article, “Young Burrup, a small delicate lad, son of a Gloucester solicitor, was for some little time stationed at the Perth office of the bank, and was much liked in the society of the capital, his gentle manners and quiet humour having won the hearts of all with whom he was brought into contact.” [42]

After the murders of Henry Burrup and Thomas Anketell a public meeting was held in Roebourne. At the meeting Mr E.H. Laurence, the Government Resident said “Mr. Burrup, though he had not been so long in the district, had by his bright cheerfulness and obliging character gained the affection of many, and they all felt that they had rarely met a more amiable and gentlemanly young fellow. ” [11]

For his family, who were so far away in England, the news and manner of his death would have been devastating. At the aforesaid public meeting it was determined that letters of condolence be sent to the grieving families of Henry and Thomas Anketell on behalf of the residents of Roebourne. In reply, Henry’s father wrote “Accept my best thanks for the extremely kind expressions respecting my poor boy, my family and myself, contained in the letter of condolence of the 16th February; it is indeed a comfort to know that my lost son had made himself so well liked at Roebourne as well as at Perth and Fremantle. . . Will you kindly make my heartfelt thanks to Mr. McRae, yourself, Dr. O’Meehan and the inhabitants of the district generally for the letter of condolence.” [43] 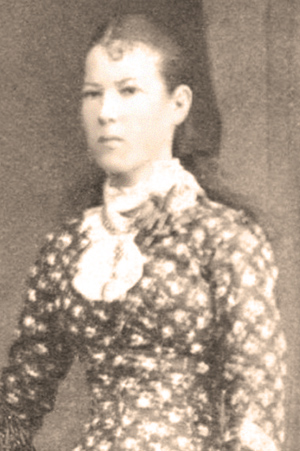 Jean Ann Lewer (Jnr) (later Mrs Walters)
aged about 17.
She kept Henry’s framed photo for many years.
Were they friends?
*******************
This is part of a photo of the Burns family group
(click here to see original photo)
taken at Roebourne in 1885.
Used with the kind permission of Gay Fielding.

A digression, but there is an interesting background story with regards to the above photo of Henry Burrup. In a Union Bank letter from the Inspector’s Dept. in Perth to the General Manager dated 14 Mar 1944, the Inspector advised that a Mr T.W. Burns of Roebourne gave him two photographs of Messrs Thomas Anketell and HTW Burrup on same date.  Mr Burns knew both Messrs Anketell and Burrup well and slept at the branch when Mr Anketell was away. He indicated that the photographs were taken at *Cave’s Hotel less than two weeks before both men were murdered at the Roebourne branch. [60]

T.W. Burns was Thomas White Burns, son of Robert Burns who was a witness at the trial of Warburton, Bevan and San Qui.

The Royal Western Australian Historical Society also has an identical copy of this photo. Their reference is (R1262). It is in an album which, according to the Society’s records, was donated by Mrs. Wilmott in 1949. The photographer was J. Manning, Perth. Unfortunately that photo is in a much poorer condition having faded substantially. On the back of it is written:

“To be returned to Mrs. Walters, Loudon, near Donnybrook.
Mr. Burrup, murdered at Roebourne in the eighties”.

Jean Ann Lewer (Jnr.) lived in Roebourne at the time of the murders and was one of the few young women in a town of only 100 or so people. As Jean Ann was aged 17 or 18 and Henry being only 23 there may have been a friendship between them. Could they even have been sweethearts?

How she came to have his photo is a matter of conjecture. Nevertheless, the fact it was kept in a frame for many years indicates that it may have had a sentimental value to her. She married a year after Henry’s murder to Charles Hackett who was a police constable and then, after his death, to Thomas Walters. [82]

I believe that at some point the original photo was removed from the frame to be copied. This explains the note on its back, “to be returned to Mrs Walters”. And, like the original, the copy has an identical oval frame “shadow” around it. Jean Ann Walters’ brother Thomas White Burns had possession of the copy which we know he gave to the Union Bank. The original ultimately ended up at the previously mentioned W.A. Historical Society.

In August 1885 the Government Surveyor F.S. Brockman named the highest hill on the then Dampier Island, Mount Burrup in honour of Henry. In the mid 1960’s Dampier Island was connected to the mainland by a causeway and in 1979 was renamed the Burrup Peninsula (Murujuga – in Yaburara/Ngarluma language meaning “hip bone sticking out [99] ) .

I will finish this short biography of Henry Burrup with the poignant words from his friend, (identity unknown) who was also a correspondent for the West Australian newspaper.

“The men were both so loved. Poor little Burrup; I was with him in the early part of the evening, and we were to have driven into the country the next day for a holiday, but when the day had come he had gone to a brighter country and for a longer holiday.” [7]Slate top laid over the grave of Henry Thomas Wood Burrup at the Roebourne cemetery. It reads:- 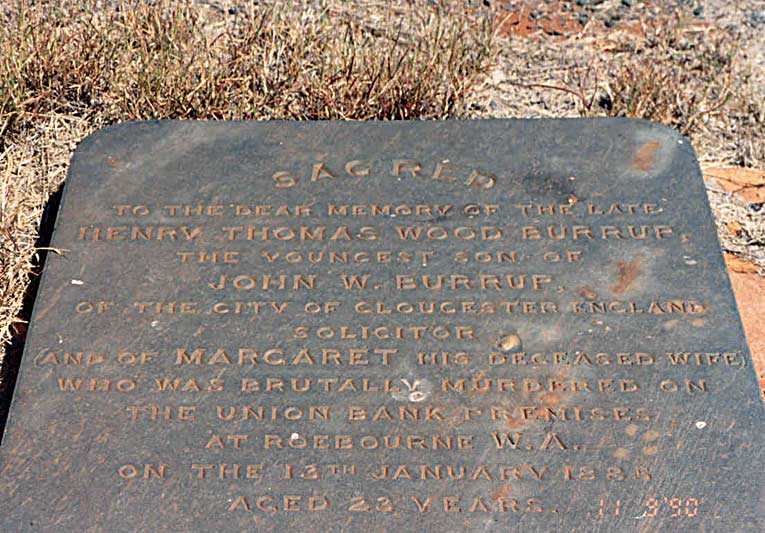 Photo used with permission “From the Shire of Roebourne Local History Collection. 2005:974.

* Cave’s Hotel is the Roebourne Hotel. Mr Thompson bought the hotel on the 3rd February 1883 and a week later, on the 11th February married Mrs. Cave, widow of Mr. H. Cave, junr., formerly landlord of the hotel. After her husband’s death Mrs. Cave had carried on that business.