“Poor Anketell was a trusty friend, a genial companion, and true man, and very many will mourn the cruel fate that has befallen him.” [27]

Information from various newspaper and other accounts indicate that Thomas Anketell was a kind, helpful and well respected man.

“He was known, at Clunes, where he was manager of the Union Bank for two years, as a most kind-hearted man, always striving to do good, and rendering valuable services in raising funds and working on behalf of all local institutions. Beloved by every one, he was never better pleased than when assisting others to get on in the world.” ~ From a Melbourne Contemporary [26]

The Australasian Sketcher gives a brief outline of his life in Victoria prior to coming to Western Australia.

“The branch of the Union Bank was established some three years ago, having been opened by Mr Anketell who left the service of the London Chartered Bank in Victoria to do so. ………. Mr Anketell was the son of a highly respected resident of Coburg, Mr W. Anketell, J.P., who has been in that district for about 40 years. The late Mr. T. Anketell was reared and educated in that district, and was always a great favourite with those who knew him. The intelligence of his untimely fate cast a gloom over the community there. He was for many years and until about four years ago, manager of the London Chartered Bank at Gordon, and subsequently, after entering the service of the Union Bank, he represented the later at Clunes.” [31]

In a letter from the bank’s administration, Frederick Innes, Assistant Inspector to the London Manager, W.R. Mewburn wrote:

“In Mr Anketell, we have lost a valuable officer, one in whom every confidence could be reposed and whose zeal and ability were alike conspicuous.” [59]

With regards to the photo left, in a Union Bank letter from the Inspector’s Dept. in Perth to the General Manager dated 14 Mar 1944, the Inspector advised that a Mr T.W. Burns of Roebourne gave him two photographs of Messrs Thomas Anketell and HTW Burrup on same date.  Mr Burns knew both Messrs Anketell and Burrup well and slept at the branch when Mr Anketell was away. He indicated that the photographs were taken at *Cave’s Hotel less than two weeks before both men were murdered at the Roebourne branch. [60]

I wonder why Thomas left his family and friends in Victoria to work in an isolated community thousands of miles away, in the harshest of environments. He must have had some spirit for adventure. Maybe the challenge of setting up the first bank in the northwest in a pioneering town appealed to him. Once in Roebourne he became very much involved in community affairs; becoming a church warden and Justice of the Peace.

It seems he did find love. He was engaged to be married at the time of his death. In a confidential letter written by Colonel E.F. Angelo to Governor Broome some 14 months after the murders, Angelo wrote:

“Anketell it appears had seen a figure bending over him, some nights before to the murder, and having a presentiment of evil went some miles out of Roebourne the morning of the tragedy and made provision in his will for his intended wife. Some of this I understand came out in evidence……” [37].

However, a search of records shows that Thomas’s Last Will and Testament was made two years prior, and dated 14th May 1883. He divided his worldly goods equally between Anna Maria Anketell, his mother, and Margaret Placideo McCourt. (the fiancee referred to?) [44]

Farquar McRae was named as Executor and paid £10 for his trouble. However, he died in 1884 from measles.

I think it likely that if Thomas were altering his Will, it was not to add his fiancee, but rather to name a new Executor. I’m not quite sure why it would be necessary to ride 30 miles out of town to Pyramid Station to make a Will. This could have been done in town. Perhaps there is some error in the recounting of the story. In any event, it appears that if a new Will was being made, it was never completed.

Poor Thomas Anketell. Fate can be so cruel. In correspondence between the bank’s Perth Manager, Mr J.T. Denny and the Government Resident at Roeburne, Mr E.H. Lawrence, there was a reference to Thomas’s forthcoming transfer to “a pleasanter place”. It was reported that his health had suffered much from the trying summers at Roebourne. [64] However, due to an interruption of the Nor’West Steam Service, a Mr Scott, under orders to relieve Thomas Anketell, was delayed. [3] If the delay had not occurred, Mr Scott may well have been sleeping on the bank premises on that fateful January night and Thomas Anketell safely on a ship sailing back to Perth; a fact that cannot have been lost upon Thomas’s family or that of Mr Scott. (unless of course Thomas Anketell was actually the target of the murderers.)

One can only imagine the anguish Thomas’s family and friends must have felt on news of his murder. As time passed, their grief would only have been compounded with the knowledge that the investigation into his murder was at best mishandled, or at worst that there was some sort of “cover up”.

In a poignant letter to the Attorney General in Perth requesting an exhumation of Thomas’s body, his brother William wrote:

“The whole surroundings of the case have deeply affected us all but particularly my mother and father and a general family desire exists that his remains should be bought back to Coburg, where he spent his youth, and laid amongst other members of the family.” [38] 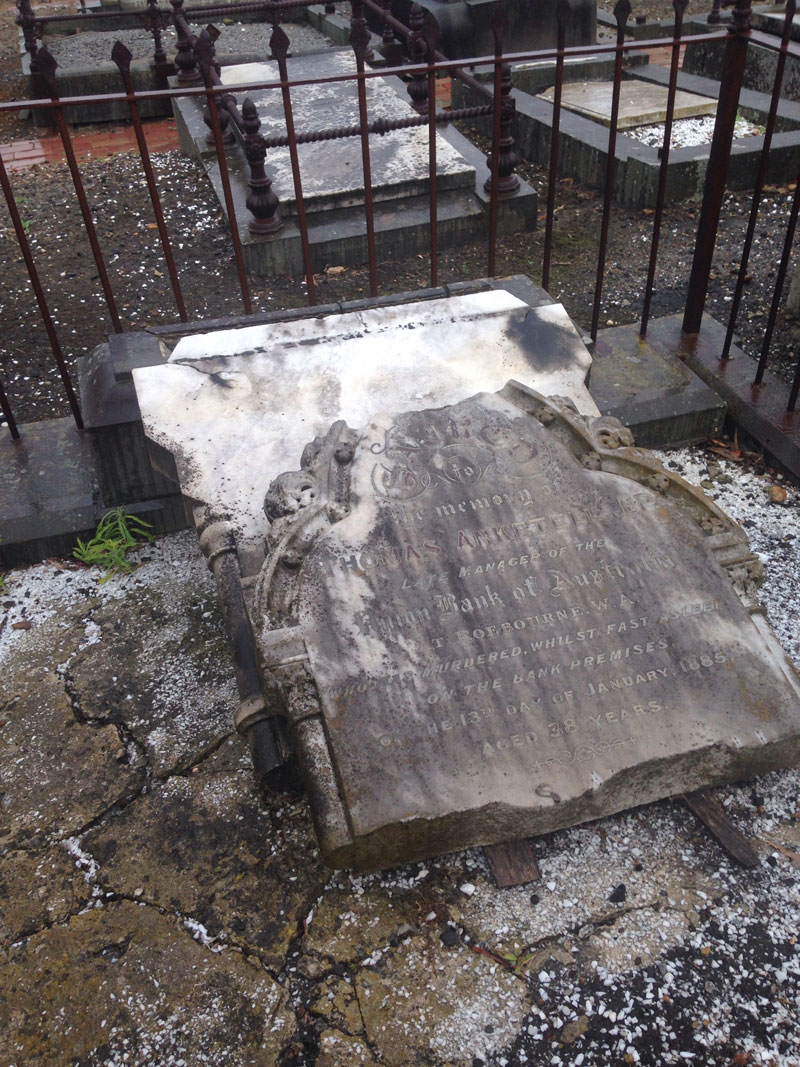 The request was granted. William arrived in Fremantle via ship from Melbourne on the 27th March 1886 and then sailed, on roughly a five day journey, up the coast to the port of Cossack (12km from Roebourne). After the exhumation he conveyed the remains of his brother back to Fremantle arriving on the 12th April 1886 and from there, back to Melbourne. What a very long sombre journey William must have endured. However, Thomas was at last bought back to his family and laid to rest at the Coburg Pine Ridge Cemetery nearly 16 months after his death.Melbourne’s The Argus newspaper reported on Thomas’s funeral:

“The funeral of the late Mr. Thomas Anketell (son of Mr. W. Anketell, J.P. of Coburg), who was murdered at Roeburne, Western Australia, some months ago, and whose body was brought over from there only a few days ago, took place on Saturday afternoon. It being known that it was the wish of the deceased gentleman that, whenever he should die, the funeral service should be performed by the Freemasons, the Worshipful Master of the All Nations Lodge, No. 425, I.C. Clunes, of which the deceased at the time of his death was a member, was apprised of the fact of the body being here. A dispensation was then obtained by him from the Grand Master of the Irish Constitution, and an emergency meeting held at Coburg, at which a large number of Masons of the three constitutions attended. The principal chairs were occupied by Brothers the Rev. Elder Gray, W.M.; A. Batson, P.M., acting S.W.; A. Wolfe, P.M., acting J.W., the Revs. E.H. Bardine, P.G.C. and Caton, acting chaplains, and Brother H. S. Jones, P.M, Tyler. The ceremony both in the lodge and in the grave, was very impressively read by the Rev. Brothers Bardine and Caton. A funeral ode under the leadership of Brother C. Lilburn, assisted by Mr C. Forman and other members of the Coburg Harmonic society, was rendered. A large number of the inhabitants of Coburg joined in the procession both on foot and in carriages.” [102]

Finally, on a closing note, here is an interesting story from The West Australian newspaper with regards to Thomas Anketell and “The Welcome Stranger” (a 72kg gold nugget, which, at the time of its discovery, was the largest known gold nugget in the world):

The following paragraph, taken from a Victorian contemporary, relating to an early experience of the late Mr. Anketell will be read with interest :

One evening; early, in February, 1869, a party of miners, for some time unsuccessfully engaged in surface fossicking in Black Beef Gully, at Moliagul, Victoria, were talking earnestly of their future and bemoaning the hard luck of the past. For several months they had worked together in the same claim, sometimes getting bare tucker, sometimes not even that. But lately they had labored without any result at all – not a speck of the precious metal had been seen; their credit was stretched to the utmost limit, but until this evening  they had hoped, as miners do hope, that on the morrow something would turn up.

Now they had ceased to hope ; the storekeeper had that day refused further credit, and here they were without either flour or tobacco. After a long and serious discussion it was decided to give Black Beef Gully best; and early next day, when they returned to the claim for their tools, they lingered round with a kind of sulky regret at having to leave the scene of so much useless toil.

In an absent minded moment one of them gloomily struck his pick into the about-to-be abandoned claim. It came upon something hard, and his practised eye caught the glisten of a speck. Stooping hastily to examine the resisting substance, in a moment he discoved that it was gold he had struck upon a monster nugget. After one wild shout they worked on in silence, and in a little while had unearthed a huge mass of virgin gold. When fully exposed to view the men were al’most insane with joy. After watching it through the day and live-long night they had it conveyed in safety to the bank.

It was named the ” Welcome Stranger,” and yielded the fortunate discoverers of it £9,260 in cash. Poor Tom Anketell, who has just fallen a victim to the assassin’s tomahawk at Roebourne in Western Australia, then a young accountant in the bank at Dunolly, with a promising life before him, was the man who made the purchase, and his story of the sale is unique. He had just opened the bank in the morning when a cart with a suspicious looking bundle in the centre covered over with a blue blanket drew up at the door.

One of the three men accompanying it entered the bank, and producing a handkerchief half full of loose gold (taken from the soil in the vicinity of the nugget), nervously asked what price would be given for it. Anketell’s answer being considered satisfactory a sale was quickly effected and the proceeds handed over in crisp new notes

But the stranger seemed in no hurry to depart, and to the accountant’s civil query if anything further could he done for him – for Anketell was the essence of politeness and good nature always – he nervously responded by asking how much money the bank had ; had it £5,000 ?-£10,000 ? Anketell having satisfied him that he had even more that this sum at command, the secret of the blue blanket in the cart then came out, and the “Welcome Stranger ” was transferred to a back room of the bank, where it was weighed.

But the owners would not give up possession of their treasure or lose sight of it until Anketell had recourse to the treasury, and had counted down every shilling of its value. They then seemed satisfied that so much money really did exist, divided the amount into three, and after eyeing the heaps for a moment paid them back to the bank to their credit.

Poor Anketell was a trusty friend, a genial companion, and true man, and very many will mourn the cruel fate  that has befallen him.”   [27] 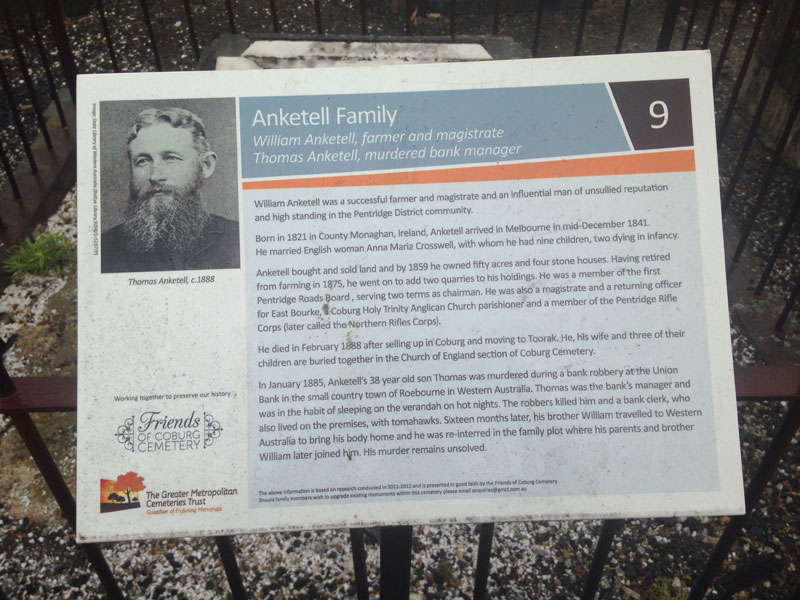 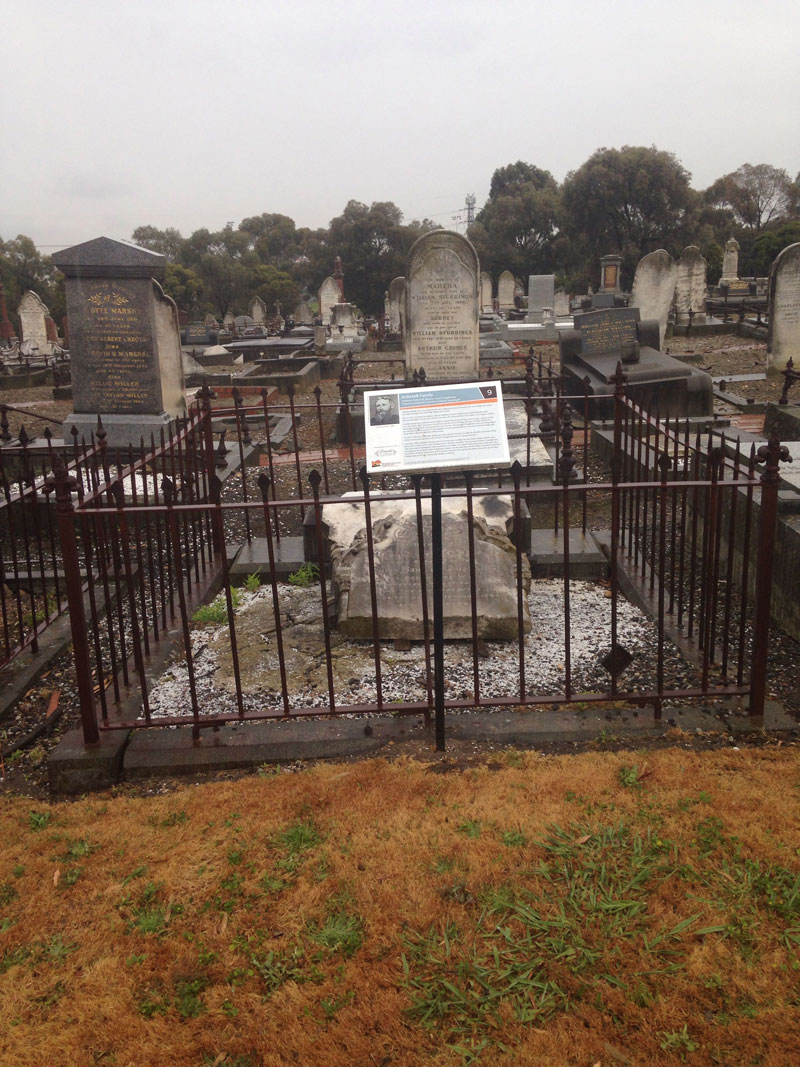