Extracts From the Memoir of Rev. E.F. Parker 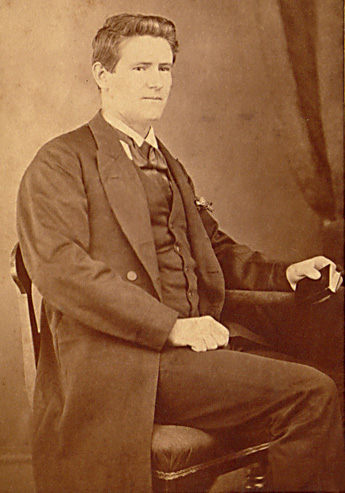 The Rev. Edwin Foley Parker was a very good friend of Thomas Anketell and Henry Burrup. They “were zealous helpers in his plans for the spiritual welfare for the people of his parish.” [61] He was probably the last person to see Henry Burrup alive, Henry having spent the later part of the evening with him at his home before returning to the Bank. As the Anglican minister in Roebourne, Rev. Parker had the unfortunate duty to preside over their funerals.

Barely three months after the deaths of his friends he too passed away at the age of only 25, dying from an infection.

Whilst playing cricket he was injured after being struck by the ball. Perhaps if he had rested the injury would have healed without further complications. He had planned on a 800 mile ride to see his parishioners but had frequently stated that he felt unwell. Unbeknown to him, an abscess formed on the site of the injury. The day before his planned departure he felt ill and sought medical help, but it was too late. “The perpetual activity prevented the injury from recovery and an abscess of the intestines resulted, which escaped any hope of control before the medical aid of Dr O’Meehan was sought.” [61] By now the injury was about six weeks old.

For two days Dr 0’Meehan tried to drain the abscess without much success, and Edwin died two weeks later on the 1st May 1885. He was aware of his impending death and elected to be buried next to Thomas and Henry, “who were like brothers” to him, in the local cemetery.

After Edwin’s funeral, his aunt, Mrs Clara Lilian Parker had the great foresight to gather together all the sympathy cards and letters that were received and after they were acknowledged, wrote a memoir about her nephew’s life. Mrs Parker’s memoir remained with the Church of England (for their archives) and in 1886 it was printed into the form of a nine page pamphlet and was made available through the Church of England Book Depot in Perth. [62]. Mrs Parker also re-wrote another copy of the memoir for her family. The following are extracts, from that second handwritten copy, that relate to Thomas Anketell and Henry Burrup. [78]

One of the most barbarous deeds ever perpetrated in Western Australia was committed on the 13th January 1885: namely the sudden and simultaneous murder of Mr Thomas Anketell and Mr Henry Burrup at the Union Bank, Roebourne.This sudden death of his two friends occurring in such an atrocious manner Mr Parker felt intensely:

“Two friends, brothers indeed to me have become the victims of some vile assassin”, he writes, shortly after the event. “Assassins can truly destroy the body but happily they can do no more. Herod beheaded John the Baptist but he could do no more and was himself aware of this, for he said when he heard of the fame of Jesus ‘That John the Baptist was risen from the dead and therefore mighty works do show forth themselves in him.”

Poor Burrup had spent the last evening of his life with Mr Parker. In a sermon, which he preached shortly after the sad event, he selected for his text Psalm XXiii.4:

Yea though I walk through the valley the shadow of death I will fear no evil: for thou art with me: thy rod and thy staff they comfort me:

After speaking of David, pouring out his grief to Jonathon during Saul’s pursuit of him – ‘there is but a step between me, and death’. We find in the sermon the following:

“It is extremely difficult to speak of death at all times, and even more difficult do I feel it now to refer to those who have so recently occurred here, caused by the hands of the assassins – without raising in your hearts … I am afraid, feelings of anger and revenge. The pulpit however, is not the place where one should arouse or foster such feelings. A minister of our great Redeemer who prayed for his enemies, and when he was reviled, reviled not again, cannot in his Master’s cause encourage his hearer’s to feelings of revenge for God is the avenger of all things and He will avenge the death of His servants.”

“Sympathising as we all most sincerely do with relatives and the friends of those who have been so suddenly been cut off, we are shocked beyond expression at a deed so atrocious and brutal in a community so small from our own. It is indeed a double, a more intense bereavement to parents, brothers and sisters, under such circumstances and must necessarily draw out a more intense sympathy from us. Let us therefore pray God that just punishment may fall on the guilty, that the innocents be not made to suffer for the wicked.”

“I need not attempt to say much to you of our two departed friends, for all who hear me knew each on personally, and that personal acquaintance would convey to you a much keener realisation of their true worth than any words I may use. We shall long continue to miss them, but much longer shall we continue to hold them dear to our memories. “

In Church work generally, and as Church Warden, Mr Thomas Anketell seems to have been active. Mr Parker, in many of his letters to his friends mentioned that gentleman’s name in the highest terms:

“Mr Anketell”, he writes, “is already missed greatly, in this District. No man has ever been, or ever can be so thoroughly respected and beloved. Both in his official and in his private capacity, the most utter confidence was placed in him. He lent a willing hand to very improvement having for its’ object the promotion of human improvement and human happiness.”

We quote the latter portion of Mr Parker’s sermon upon this subject as it contains some good advice to parents: moreover it bears directly upon those points we have ourselves contested, that the seeds of good or evil take root in early life, and if parents neglect their children they will assuredly sooner or later have sorrows and afflictions come upon them as the common result of the wicked devices of evil men.

“Before we leave this evening, I have a question to put to you. Why are we not all murderers? You would all be shocked to think that anyone supposed that you could contemplate so terrible a deed as murder: But that does not answer the question which I repeat…why are we not all murderers? There is no other answer that that it is by the grace of God. We are not, You may talk boastfully of the moral sense of right and wrong which you have and which would effectually hinder you from committing any great crime. You may call it manliness of character that deters a man from foul deeds.”

“Perhaps so, the may be many praiseworthy traits in a man’s character, each one which would keep him from perpetrating murder. Yet, reach to the bottom and you will find but for the grace of God they would not be there. Then it behoves us to pray to God that that he will give us the fullness of His grace to lead us into the paths of righteousness. There is no use in thinking that we would never commit any evil deed. No strength of our own will keeps us secure.”

“Take for example, what is said of  Ha..ael, the one day even he disclaimed the possibility of doing the wicked deed the prophet foretold and on the next day he did the foul deed of his murdering his master. The moment we are cut off from the Grace of God we become the servants of the Devil and he was a murderer from the beginning. There are some of you here who have children.”

“You know the deepness of a parent’s love, What agony of mind it would be to you. You think a child of yours could be guilty of such a foul deed of that which has just been committed, and fills our minds with horror, and yet what is to prevent it if you do not ask God, and ask in faith, nothing wavering to give your child his Grace to walk in the straight and narrow path of righteousness.”

“Have you ever noticed, that in every child God has given you he has committed a talent to your trust for which one day You must render an account? What then will be God’s displeasure at the day of reckoning, if it be found that you left that talent to rust in the vice of wickedness of this world?”

“Oh, my brethen, pray that the words of your mouths and the meditations of you hearts may be acceptable in His sight and then he will prevent us all in our doing. He will further us with his continual help, so that all our works may be begun, continued and ended in Him. And we shall glorify His Holy Name by walking in the paths of righteousness till in the end we shall be brought “through the shadow of death” to everlasting life with Christ our Lord.”

The result of the trial of the three men who were accused of the murder of Anketell and Burrup at Roebourne has long been before the public. The charge against them was “not proven” and they were accordingly acquitted. But before God, the perpetrators of those cruel deed stand accused whoever they may be, for the crime is in no way hidden from Him “In the image of God made man” and the usual of offered to the Majesty of God by the murder of one made after the image of God.  He will surely avenge.

The guilty may escape for a time, but ‘who sheddeth mans’ blood, by man shall his blood be shed’ is a Divine decree and if God’s word is not to pass away as we are assured it will not, neither will those atrocious deeds, which by God’s Authority, are to be punished with “death”, pass away without detection sooner or later. [63]