[The following is the transcription of two cyphers. The first being a telegram to the Supt. of Police sent by W.C. Lawrence in Roebourne and then a reply. The first cypher did have spelling errors.] 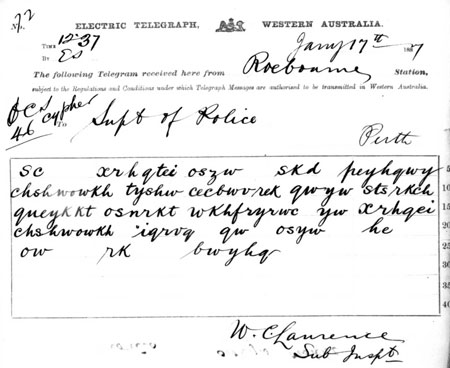 To Supt of Police

as lithgow any forther statement grate sospecion here against hbornng making enquiries re lithgo statement which he made to me in Perth.

Yes rather different – now says not with them not asked join – saw about midnight three men pass Hotel go to bank – saw Bevan – heard name Pontt – did not know other. McRae not mentioned. Bevan had tomahawk. Heard crash and heavy fall. Men at Bank fifteen minutes. Saw man come out back bank and go to McRae’s store – other two came out front go towards Thompson’s stockyard. Then Lithgow got horse and went to Woolhouse’s – ostler at Thompson’s served him that night with drinks. Thinks he was Dutchman. Thinks Bevan was in shirt sleeves.

This website was selected for preservation by the State Library of Western Australia. It is now listed in perpetuity on PANDORA, Australia’s website archive established by the National Library of Australia.