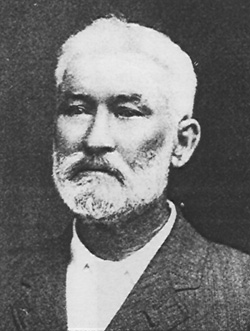 Joseph O’Hara in his later years.
Whilst a Police Constable, O’Hara took down
the first statement made by James Lithgow
at Chidlow Wells and then accompanied
him to Perth. Lithgow then went on to
make further different statements.
Photo courtesty of Graeme Sisson,
W.A. Police Historical Society Archivist

I have to submit the following statement for your information giving [sic] by James Lithgow on the 4th inst.

“As follows. I was in Roebourne on the night of the murder of “Anketell” and “Burrup”. R. MacRae, “Bevin”, “Pont” and myself made it up to rob the bank about 3 am. We went to the bank and went on the front verandah where Anketell was sleeping on a stretcher. MacRae had a pick in his hand with which he struck Anketell on the head and killed him. Bevin and Pont were on the verandah at the time. We tried to enter the bank through the front door but could not. I went around to the back of bank and broke a pane of glass and opened the window and got into the bank and opened the front door and let MacRae “Bevin” and “Pont” into the bank. Bevin went into a room where Burrup was sleeping and murdered him. Pont was standing at the door while Bevin was inside. We tried to break the safe open but could not manage it. MacRae collected a lot of papers together and told me to burn them. I struck a match card and set fire to them on the table and light was beginning to set in we all left the bank together. MacRae’s shirt and trousers were smothered with blood. MacRae went to his store for a change of clothes and I went for my horse and coming back I met MacRae again and he changed his clothes in my presence and concealed them. The weapons used in the murder were a pick and tomahawk. The tomahawk was my property. I couldn’t say what became of them. I owed MacRae about 30 or 40 pounds and he foregave me the debt to keep me from saying anything about the murder. I left Roebourne about 5.00am that morning for Mr Woolhouse’s station where I had been working previous to the murder.”