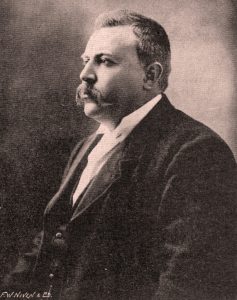 I drop you a few lines per “Mary Smith” to give you particulars of the ghastly and horrible fate that has overtaken poor Anketell and Burrup of which telegraphic news ought to have reached you, per special messenger to telegraph line, about Sunday night.

Our dear friends, Mr Anketell I may say a dear and valued one, have been most basely and horribly murdered asleep in their beds. They were assassinated on night of 12th inst between midnight and dawn, it is supposed about 2 or 3 a.m. Roderick McRae was with Mr Anketell until 11.30pm and then left him all right. Burrup was up at Edwin Parker’s until midnight. Anketell must have waited up for Burrup and they would both have got to bed, at the latest, I should say about 12.30.

The wretches made a most diabolical job of it, and evidently used a pick, some people think a morticing axe and tomahawk, or equally sharp heavy instrument. One terrible wound in Anketell’s head is fully 3 1/2 inches long and goes nearly clean through the head. His skull was one mass of ghastly wounds, and clotted hair. This assassin or assassins not satisfied with their so far terrible work seem to have driven a sharp instrument right through the ear.

In poor Burrup’s case there was another heart rendering sight, one great big wound over the forehead, large enough to put your hand into, besides others and bruises on the arm and two cuts on right hand, and blood, blood on stretcher, pools on pillow, scattered on both sides of his room, and onto the ceiling. Oh! it was a horrible and long-to-be-remembered sight of butchery.

There is no doubt whatsoever both poor fellow died instantaneously. The doctor (O’Meehan) says any one of the wounds on either body, with exception of one on Anketell’s cheek, which broke the jaw, would cause instant death.

The front window of Manager’s office was found open, a pane of glass had been broken, and the ordinary button easily undone of course.

The murder or murderers had been into the Bank and lit matches leading from their entrance to the safe, just igniting the sulphur and then putting them out as if they were afraid to burn a light. They appear to have made very little search for the keys, Burrup’s being found in his waistcoat pocket hanging on the wall alongside his stretcher and Anketell’s in a pool of blood on top of the bedding under which his body was lying. The keys were on top of everything – a most curious part of it, it almost looks as if the murderers had tried to make use of them, failed and put them back where they were found. The sign board near which Anketell’s body lay was spattered with blood, as well as floor and window adjoining. It was a very dark night, and from the proximity of the surrounding houses (A. McRae’s about 35 yards S.E. and Mrs Law’s a washerwoman, also charwoman to the Bank about 60 yards due south) the villians must have been afraid to light a candle on the verandah altho’ they evidently had one burning in the office as the grease spots were found next some copying, blotting and cartridge paper in a box, all of which is singed at the edges.

Anketell always took his stretcher out on to the verandah these horribly close night and slept there according to where the winds was; and Burrup slept in his bedroom generally with the windows open. There is a gully between the Bank and Mrs Law’s and Burrup must have been watched into bed.

I recommended the Resident to have the cash inspected, this I thought better to have done altho’ it was almost evident on the police finding Burrup’s keys in his pocket that the cash was not touched.

I examined the safe in company with Lawrence (the R.M.) and Pearse and I am glad to say nothing has been touched – treasury, and cash and books (the later written up to the Monday night) just the same as ordinary.

Mr Anketell will be a sad loss to the district, both officially and privately, many I might say every man, woman and child in Roebourne and Cossack that he came into contact with, loved and respected him. To myself he was a warm friend, one whose memory I shall ever cherish. Burrup too in the short while he had been here had made himself universally liked, he was the life and soul of the meal table at Thompson’s.

Mr Anketell left Roebourne on Sunday morning at 3am in company with J. Edgar, they spent the day at Meares & Wilkinsons and went across early on Monday morning to the Pyramid Station, he rode in by himself to Roebourne reaching there about 8.30 pm so he had ridden 42 miles that day and must have been tired on arriving in town, after which McRae joined him, as I have told you.

£150 has been offered privately by H.W. Sholl and H. Hickes and others, and £50 by Government for information leading to conviction of the assassins.

The Chinaman was seen in conversation with Bevan, their tracks (the two whites) have been traced from behind the Bank (not close to it) round by the cemetery and across the river into McRae’s paddock to where the two men were quarrying.

From the first, suspicion seems to have rested on these men as being the only whites in the place at all capable of committing such a deed. Apart from the tracks there is not much evidence, no clothing with blood or instrument can be traced home to the arrested.

Since the Bank opened here everything has always seemed so safe and secure and such horrible deeds were thought incredible. It is impossible to sleep inside the Bank in summer, and you will I suppose have some bother in the future.

The double funeral took place on Tuesday evening and was the largest ever seen in Roebourne. It was a mournful and melancholy sight to see the two coffins of these who had been in such health and strength only the night before.

Lawrence has placed the Bank under the charge of two young men named McPhee & Carey, both respectable and reliable. He keeps the keys himself.

I was in Cossack when the dreadful news reached us about 9.30am and hurried up as soon as I could which was not till near 12 o’clock. I had two or three minutes to spare before the special messenger left with the telegrams, and thought of offering to open the Bank for you at all [?] temporarily until you sent up or came up yourself, but felt myself to stand in such an awkward position with regard to the Bank that I decided not to wire.

I might mention that Burrup’s life is insured for £500 and Mr Anketell’s £200. The messenger left here at mid-day on Tuesday the 13th inst, and if he has had any luck you ought to have heard of this dire intelligence last night or before.

In conclusion this atrocious, base, and treacherous outrage has earned a widespread feeling of alarm and distrust in the district. Most people carry firearms at night, ladies frightened out of their wits.

We have a movement on foot for a general subscription to a monument to the memory of the departed. I need not say it is a most popular one.